turn on suggested results
Auto-suggest helps you quickly narrow down your search results by suggesting possible matches as you type.
Showing results for
Search instead for
Did you mean:
Options
erichalter
New member
1 0 0 0
Message 1 of 21
727
Flag Post

Despite the release notes, the latest version of HP Image Assistant does not work with the latest version of Windows 10 (release 1909) when I try to run it I get the following message: "HP Image Assistant does not support Windows 10 version 1909 for this platform. Would you like to download the list of supported platforms and operating systems?" The downloaded list does not include version 1909 despite the release note that says it does.

Well, Rats.  Looks like this is indeed the case.

I ran a couple of tests to confirm,

I have reported the problem.

Still waiting, although we have now garnered the attention of those who will investigate the cause and provide a solution.

Tested on Windows V1903 - then updated to Version 1909 and HPIA does not detect updates for this latest version of Windows.

Personal Observation:  Assuming the software has indeed be updated to support V1909, this may be simply a catalog error.  Still bad, of course, but perhaps more easily repaired.

Thank you for participating in the HP Community Forum.

We are a world community of HP enthusiasts dedicated to supporting HP technology.

Answered? Select the relevant post "Accept as Solution" to help others find it.

Sometimes it runs normally and will analyze the system. (It has successfully completed the indicated driver updates as well.)

However, sometimes when I click on the Analyze button, it reports the version of Windows is not supported by the program.

I have experienced this inconsistant behavior several times but have not been able to determine a pattern for when it will or will not run normally.

Thanks for your comments.

Yes, I have seen the same result(s) and have passed these on to those in HP who can look at it.

Consistent inconsistency - one of my least favorite types of errors.  Rats.

Thank you for participating in the HP Community Forum.

We are a world community of HP enthusiasts dedicated to supporting HP technology.

Answered? Select the relevant post "Accept as Solution" to help others find it.

Try again and see the reference images for your platform are now available.  I just tested on an 840 G5 running 1909 and HPIA worked properly.

There has been an effort to get 1909 reference images loaded to the HP Support Site.

I saw the same issue about 3 weeks back, and have not tried 1909 again because it is a time sink to do so if it still has not been fixed. This is the only thread I have found that speaks to this problem specifically, I am subscribed to this thread and will keep googling on it as I deploy more machines.

I am at the initial stage of deploying 26 HP Z2 G4 Tower Workstations in my firm's AD environment, we are replacing all the existing Z210 workstations because of the looming windows 7 EOS on January 14th and the fact that the new machines are speed demons compared to the old ones 🙂

They have been sitting in their factory boxes for most of the year, we bought them in January of 2019 to avoid the price increase due to the trade tariffs that went into effect in Q1. But the schedule to deploy them was not to happen until Q3 or Q4 of 2019 due to scheduling conflicts

The machines have a factory build of 1809, and regardless of whether you tell the OOBE setup on first boot that you want to skip the new feature release for now or not, once you hit the desktop, and look at windows update settings (NOT check for updates) you will see that 1903 at the very least is already being downloaded.

The first two machines I deployed were in early Q3 2019, so no problems there, 1909 was not available in windows update at that time for the Z2 G4

On the third machine I deployed in Q4 2019, the Z2 G4 apparently was okayed for 1909 by that time. I was doing my usual thing of downloading and installing all Windows updates and then subsequently HP Image Assistant driver and firmware updates when I hit the wall: 1909 went in on the next check for updates after 1903 completed installation, because I did not have "defer feature updates" set  yet (it was still at 0), but I didn't mind having the latest update in there (what could go wrong??), so I went forward.

First thing I tried to do was roll back the feature update.

That turned out to do something un-intuitive, and it rolled all the way back to 1809.

I think this has something to do with the fact that 1909 is just an enablement package; all the code for 1909 was pre-installed with the 1903 feature update, Microsoft just decided when they wanted to flip the switch and called it a feature update. Rolling it back as far as windows installer was concerned rolled the whole 1903 / 1909 package back

This left the formerly pristinely set up windows 10 installation in a state I don't like to build a long term user platform on top of.

I am pretty methodical when I deploy PCs, and , as such, always take a Clonezilla image of the hard drive in it's factory pre-boot state before I begin setup. This has saved my bacon in the past and helped in this case.

I restored the factory image, re-did the setup, and immediately changed the Advanced windows update settings to defer feature updates for up to 365 days. I discovered later on that this is worded misleadingly. It does not "allow you to defer" feature updates, it just plain DOES defer them for that many days as far as I have been able to determine from my research and first hand observation. I am not sure that the Quality updates setting does the same thing, I believe that one actually determines how many times you can hit "defer updates for 7 days" "Defer updates for 7 more days"

Anyway, I now have a reliable way to make sure that 1903 gets in and 1909 does not, but I would much rather deploy the PCs with the latest feature update installed and HPIA run afterward to make sure all the vendor specific drivers are put in place of any generic ones (if that is even how things are done anymore with windows 10 in the mix)

Has anyone here successfully run HPIA against a 1909  build Z2 G4? If so, what was the approximate date you did it?

Note to any who have not used Clonezilla live, it is superior to any hard drive imaging product I have used in the last 25 years in terms of performance in the way I use it. Not only that, it is free: it is open source and maintained constantly. It runs on a linux distro, and you can easily download the .iso file and use tuxboot to write it to a USB thumbdrive to make a bootable imaging tool.

I like to be able to turn a PC around quickly without having to do a wipe and reinstall and endless updates all over again, and I like to have images to cover the following scenarios:

I tend to take images at these stages so I can start only as far back as I need to given the scenario.

I don't have to go back to those images often, but when someone's machine is hosed, or a new hire comes on with ZERO lead time and we have a PC in inventory that is not being used, I can pull things off in a few hours or within a day depending on how far I need to go back in the image chain given the requirements.

I am the only IT pro at my firm, and having stuff like this to fall back on really reduces the pucker factor when my plate is already full and a PC turnaround is dropped in my lap 🙂 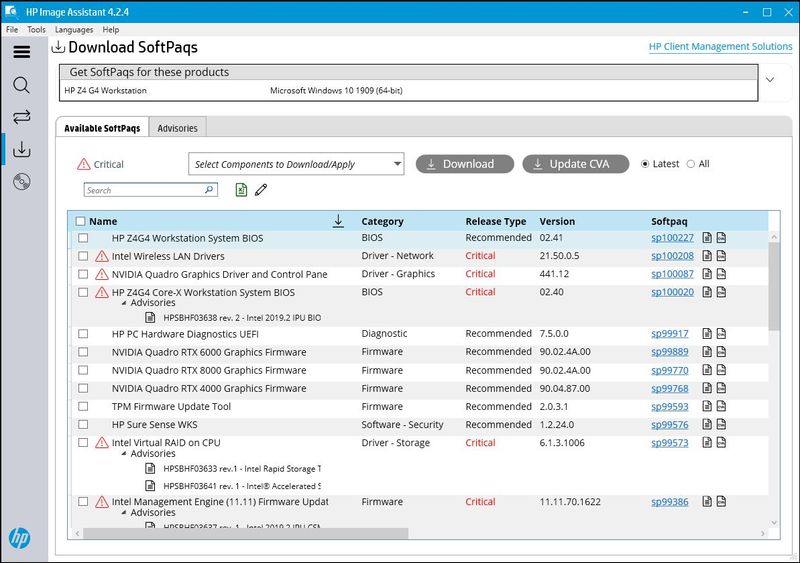 Once i got the machine fully updated with HPIA at the 1903 level a couple of hours ago, I took a clonezilla image of it, and allowed windows to update to 1909. And I tested running HPIA and yes sir, it does work, thank you for the reply.

I was going to post my own update here once I was done with the workstations completely, But you beat me to it 🙂

However, I noticed another problem that I will address perhaps in another thread.

I get a notification on the last boot after all the updates are done (including the update to 1909) telling me that I should uninstall the Intel Graphics Control Panel application, with a button marked uninstall.

It takes me to apps and features, but there is no uninstaller there for Intel Graphics Control panel.

Any advice on this would be great, I am going to leave them both in place for the time being because I really have to keep the deployment moving along.

I will pass this information along to the Workstations graphics team to make them aware if they are not already aware.  This could be an issue of a legacy and DCHU driver both competing for installation.