I've just done a few more tries, and there might sometimes be up to a ~30 second delay between the onscreen keyboard icon changing and the power management changing. i think it was just a coincidence that on my first attempt they happened at exactly the same moment. Though it does look probable they're related - I suspect both windows and the BIOS are both looking at the same signal relating to the keyboard position.

But the difference is clearly discernible on my computer...

The above view shows the issues clearly ... it can be dividend up into roughly 4 quarters.

The first approx 25% shows it relatively idle. A few browser tabs open, but only in the background and not being interacted with. The blue CPU line is low at this point because it wasn't being asked to do much.

In other words - at this point, you can have a fast CPU, as long as you don't try to use it!! The inverse correlation between the blue and orange lines in that second quarter is pretty clear!!

Then at approximately 50% you can see the purple line dive - that's the power limit throttling switching off -  and the CPU temperatures (various shades of green) step up. This is the moment that I swung the keyboard from behind the unit, to in front.

From then on, for the second half of the chart, the CPU frequency remains high. The temperatures remain high. Even when the 'full build' on visual studio finishes shortly after swinging the keyboard to the front, the performance remains high - the CPU stays high, power limit throttling remains off. With the keyboard in front, it's now performing great. (But the keyboard is now in the way of using a separate, full sized keyboard).

I have news. The BIOS version could not be downgraded. I reset the BIOS settings, the performance improved, the core frequency did not fall below 2 GHz. But I did an experiment, installed a corporate version of Windows LTSC on a laptop, performance changed !!! The first screenshot of windows 10 home: 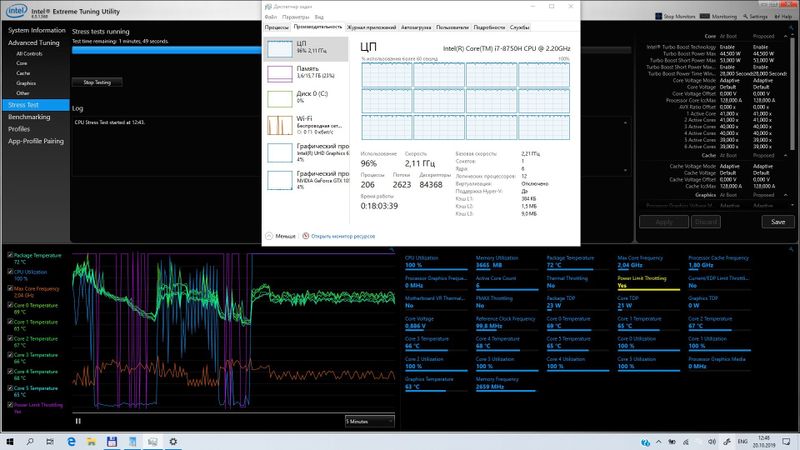 the second screenshot of windows 10 LTSC: 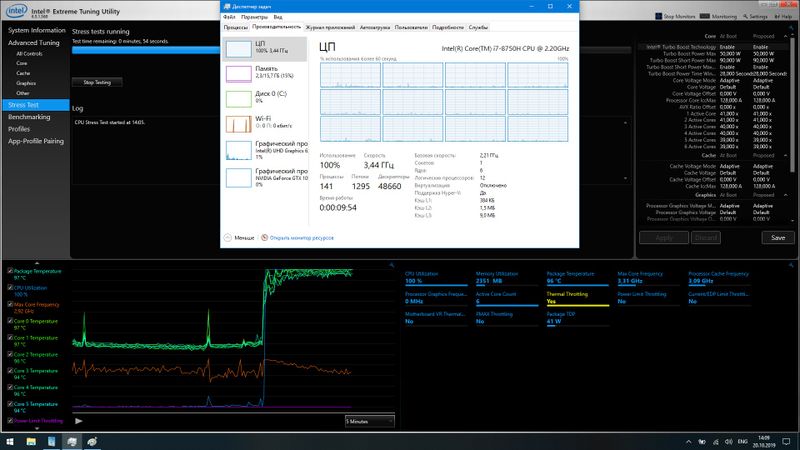 This is not quite the solution that I would like to apply, in the LTSC version there are no some functions necessary for me. I will continue to test this solution, but at the moment for me this is one of the possible options.

@Menel I understand your concern and I have brought your issue to the attention of an appropriate team within HP.

I have same problem with performance after BIOS updating to F31. But now (after upgrade to F32) i can't downgrade BIOS version to F28.

If you have the same Laptop as the above mentioned thread, do downgrade the BIOS using the "BIOS manually from a USB Flash drive" option from this link: https://support.hp.com/in-en/document/c00007682, else let us know your Computer name and model number.

After upgrading to version 32, it’s impossible to downgrade even through BIOS and USB

Please understand that even if we were able to revert back to F28 that that would NOT resolve the issue raised on this thread. It may (if it could be done) act as a temporary workaround, but it is NOT a solution.

At the time I wrote the original post, we were able to switch between F28 and F31 at will. The not being able to revert from F32 is a new - additional - problem that has appeared since this thread was started.

At the time I wrote that OP, I was able to revert back to F28 - contrary to what your "Premium" support center is prepared to believe - and choose which problem I wanted to have to live with.

An HP employee reading this forum forwarded my concern onto the local premium support team around 6 weeks ago now.

I have had multiple contact with them, and now my patience is starting to wear very thin.

I tried to stress to this first line support engineer to - PLEASE - emphasize to the second line support that prior to F32, I was able to switch between F28 and F31 a number of times, and most importantly each time I did, the problem came and went according to the version

Where does this leave us?

Although HP have opened a support call for me with their "Premium" support, all premium support seem to be doing is going by the script of 'things to try if a customer complains their computer is slow' - like looking if any process is hogging the CPU etc. I have had a number of times to point out that this issue occurs when deliberately loading the CPU so it should be sustaining 100% usage.

They don't seem prepared to accept the pretty clear evidence that this is highly likely a problem with the BIOS.

In fact, the latest support engineer did start to try and suggest that this is possibly intentional behaviour for this model.

I really had to stress to him that that was not how it behaved on the original F28 BIOS that the unit shipped with, and so I do not find that stance reasonable.

Furthermore, I bought this unit specifically to swing the (built in) keyboard out of the way when doing productive work. And when I received the unit, that is exactly what I was able to do.

He also suggested that I should back up all my data, etc, as they might as the next step want to do a full factory reset.

It just feels like a last gasp guess of a support team that just don't seem prepared to accept that there is a bug in the BIOS.

What would be a proper solution?

With each week / month that passes by, my confidence that HP will ever fix this is diminishing.

@Anon16 I understand your concern and I have brought your issue to the attention of an appropriate team within HP.

Hi, i have the same problem. Along pity performance, the unit is also hot as hell due to fans being turned off all the time.

Anyway, if you  08519.bin file, u'll get rid of this error. Not of much use anyway, because u'll get "Unable to open signature file" error. They locked BIOS rollback.

I am much, much disappointed by HP.