turn on suggested results
Auto-suggest helps you quickly narrow down your search results by suggesting possible matches as you type.
Showing results for
Search instead for
Did you mean:
Options
Highlighted
Pilgrim3
New member
2 1 0 0
Message 1 of 32
645
Flag Post

@Pilgrim3 Greetings from the HP Community!

As long as the bluray drive matches the tray of the slimslot dvd drive on the device, it should work, that said, here's all you need to know about replacing it: 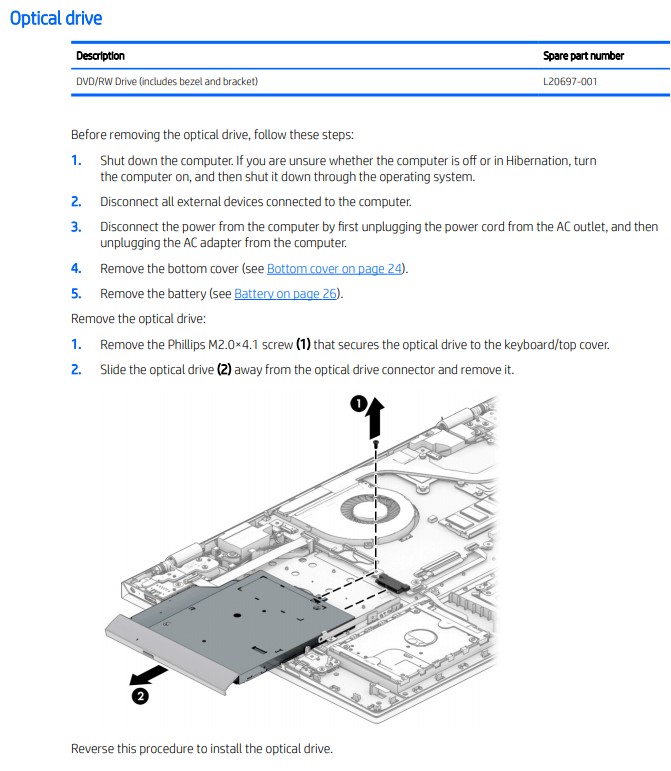 Keep me posted, as I (Or a trusted colleague) shall follow-up on this case to ensure the concern has been addressed,

And your device is up and running again, only in case you don't get back to us, first!

That said, If the information I've provided was helpful, give us some reinforcement by clicking the solution and kudos buttons,

That'll help us, and others see that we've got the answers!

I was hoping to learn which model of blu-ray burner would fit in my computer.

HP does not recommend upgrading or downgrading hardware parts or software that is bundled with the product as It may affect the manufacturer's warranty and performance, however, you could change the configuration at your own discretion.

I would request you to reach out to our Support and our Support Engineers should be able to sort this out. HP Support can be reached by clicking on the following link: www.hp.com/contacthp/

Its a 9mm tray load optical drive so any 9mm tray load Blu-Ray burner will work. It will mean that you have to disassemble the optical disk drive you have and replace the existing bare drive with a bare Blu-Ray burner and swap over the caddy mount and the faceplate. The Manual does not show how to do this but you can find a Youtube that will walk you through. If you have any problems post back here and we will find you a youtube.

This one would work fine:

You will need special purpose software to watch or author Blu-Ray videos; DVD software may or may not have functionality for Blu-Ray.

Post back with any more questions and please accept as solution if this is the info you needed.

Yes, I found the subject Blu-Ray-Rom drive on Amazon, and it is a steal!  As is so often the case in life, however, it will not "mate" with my current dimensions.  Now that you have suggested another, I think that we have a winner!

I did view a how-to video on the subject and believe I have the required skill to execute the conversion.  If I cannot and have exhausted other solutions resulting from my own inquiries, then I will call upon you again.  Where there's a _______ will, there's a _______ way!

Lastly, I already run the entry level Cyberlink PowerDVD 19 64-bit and will purchase the required upgrade to support Blu-Ray playback.

I noted that you are quite active in this community and have supplied helpful solutions to a number of people.  I'm so pleased that you provided guidance to me also.  It's a small world after all.

I'm perfectly satisfied with my current HDD and take great care of my entire laptop with constant upgrades and other daily maintenance.  In 2008 I dropped my companion's machine and crashed her HDD, and she stepped on her laptop very recently and replaced the HDD with an SSD.  Absent the actual NEED to replace a damaged HDD or my being sold by the allure of this computer tech's come-on, is there a compelling reason a consumer should make this upgrade on a laptop that is just over a year old?  I'm a retired lawyer, and mine is primarily an entertainment center streaming 128 kbps streaming audio to my Bluetooth speakers or projecting streaming 1080 P video or DVD's to my Microsoft Display Adapter on my Big Screen.  Aside from using Edge, Skype and Outlook on a woefully slow 10 Mbps DSL connection that is the only ISP available and a mere 32 GB out of 1 TB of data occasionally, my needs are met.  Am I missing anything "fixing what isn't broken?"

If you think I am, then what SSD's available on Amazon, eBay, Walmart or elsewhere would swap with or augment my present HDD without modification, please.

Small world indeed. I also happen to be an attorney not yet retired but getting close. A 2.5 inch SATA SSD will swap in wherever there is a SATA hard drive. Windows 7 and higher just knows when it is running off an SSD and makes all the necessary adjustments. An SSD is the most compelling upgrade one can do to a computer. I will never own another computer running from a mechanical hard drive. The performance upgrade is nothing short of amazing. Post back with any more questions and I can point you to a specific product to buy and provide step by step instructions if needed.

I recall that I might have just done that, sir, when I mentioned retailers such as "Amazon, eBay or Walmart" in my last post.  No matter, since we are no longer restricted by a 9mm measurement that turned out to be quite a rarity during my subsequent search for competing Blu-ray drives to the one you recommended.  How unlike the 9mm ammo I used to handload prior to embarking upon my incarnation as a CA lawyer in 1992 and twenty-five years of, as my colleague in SC who has a much more profitable practice did opine, shoveling s__t at the tide.  I wore many hats, but none of them really fit.

Someone once remarked that one should do one's profession only if:

1. One has many bills requiring payment during one's lifetime;

2. One makes so much money that it is a very profitable use of one's time;

3. One does it for sheer pleasure; or

4. Any combination of the three.

If none of the three apply, then do what I did and go to the beach or "the other bar" of your choice and let one's investments do the work, but I digress.

I had accumulated a significant number of Bing search "rewards" cards over the years and a successful (surprise) Amazon Visa application and traded them in for the Blu-ray drive and other sundries.  "What the h_ll," I thought.  I will do my research and contemplate making the SSD upgrade at a time when I deem it especially desirable or simply purchase a newer, SSD-equipped laptop as necessity or preference dictates.  Full depreciation is not normally my MO in recent years, though my first Mac Powerbook was in use from '93 to '98 and retired when it could no longer run the most current OS.  I'm no programmer, tech or power user, but I keep my system running as efficiently and up-to-date as possible.

Thank you for you continued indulgence and expert advice, sir.

I'll assume that you won't point me to a specific product for the SSD based upon my previous reply.  Okay,  Here are three more questions for you:

1. Now that I purchased the BD you recommended, though very capable it is certainly not state of the art in 2020.  Do you know of any internal 9mm BD UHD drives?  I have CyberLink PowerDVD 19 Ultra installed that plays UHD, but will my drive?

2.  Until my recent switch from Acer to HP laptops, the first thing I always did was maximize the RAM.  I have 8 Mb, but the manual and specifications are silent about what the maximum RAM is.  Am I maxed currently?  If not, is it user serviceable? and

3. On Wednesday I ran a HP diagnostic for my battery.  It claims that it's operating well, but I ordinarily get only 3-4 hours of operation at best with only Edge, WiFi and Bluetooth in operation.  The manual makes the process of changing the battery one of calling customer service and warning that it is not a simple procedure.  May I assume that there are no drop-in batteries available for purchase online?

Please advise and thank you.