My HP Support Assistant told me to uninstall the current version and install the new one.  I uninstalled the old version and downloaded the  most recent version.  A file called sp108770.exe was downloaded and ran.  It created a folder called SWSetup was created but no question mark icon appeared in my lower task bar.  Also no program for the support assistant appeared in my list of programs.

I have just had the same issue.

HP support assistant updated via the microsoft store and upon opening an error was indicated.

Uninstalled via settings and apps, rebooted an then followed instructions found online to download the HP support assistant which promptly unpacked and then ran but was met with a stopped install indicating that "a newer version is already installed".

Proceeded to remove the support framework, reboot and then attempt reinstall again with same result.

Can now not even find the HP Support Assistant app on the microsoft store and unable to install the application downloaded from the HP website.

Sadly not a solution to your problem but you seem to have the same issue.  Different machine, an envy x360 13 inch but it may be a bigger issue so keen to find a solution.

Roguck I have the same issue as you. I have a HP Spectre x360 13t (late 2019) model. The HPSA had been working just fine, but today the MS Store updated it to version 9.6.838.0, and now it won't load properly. I followed the troubleshooting on the error windows which included to restart the app, then restart the computer, then check and download Windows Updates. Did all three, with no effect (and there were no Windows Updates to update).  So I uninstalled HPSA and went to the software and drivers download page for my machine and downloaded the version of HPSA showing there, which looks very out of date (version 9.6.587.0). This downloaded OK and loaded fine. Then I ran a check for updates in MS Store and it downloaded the 9.6.838.0 again. This time it did load, however that only lasted until I restarted my computer. Then HPSA was back to failing to load with exactly the same error.

So I uninstalled it, and this time I've downloaded 9.6.7410.0 from the HPSA main website. It opens fine, and survives a PC restart,  BUT, I suspect tomorrow when I check for updates in the MS Store it'll just download the problematic 9.6.838.0 version again, and I'll be back to square one again.

I don't know if it's relevant, but I'm running BIOS version 16 on my machine. According to my product's software and drivers page this BIOS has since been yanked, as it's back to showing the previous version (15) as the most recent. I'm not sure when it was yanked as I updated my spectre to F 16 about a month ago. It was available for several; weeks before I updated it too.

EDIT: The MS Store has just updated HPSA to the same problematic version 9.6.838.0. Now it won't work again. HP needs to pull this version from the MS Store as there is nothing a user can do to prevent the HPSA app from auto-updating. Here is the error on launching HPSA version 9.6.838.0: 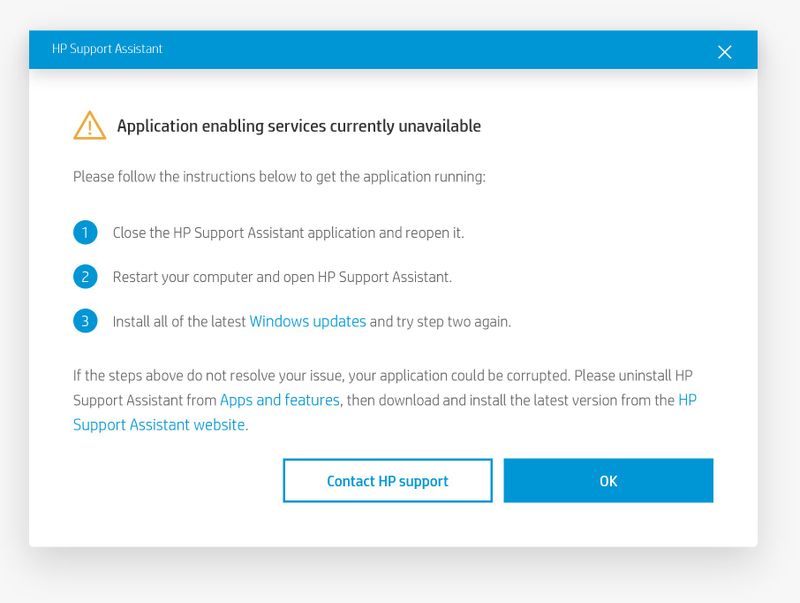 Everything is up-to-date on this laptop (Windows 10 20H2 1942.610) and a SFC shows no integrity errors. I ran a DISM RestoreHealth command anyway but that didn't change anything. Everything in Services relating to HPSA appears to be enabled and running OK.

This is clearly a buggy version in the MS Store.

OK for some reason my snipping tool pic of the error didn't upload properly. It shows in the preview but turns to a blank thumbnail after posting. Not sure why. The error when launching HPSA says "Application Enabling Services Are Currently Unavailable". (Will try editing and uploading a .jpg instead of a .png file to see if the picture shows after posting - nope apparently not!)

Thanks for the feedback.

Interesting BIOS link as on my Envy, I updated to version F20 (there was an issue installing it however) and a recent new BIOS has become available to address some of the issues of the F20 version.  The new version F21 would not install using either the Support Assistant or via download from the HP driver support.  In addition, version F20 has gone missing from the previous version page as well - similar to what you describe.

Unfortunately, despite using a similar method to reinstall the support assistant, I am simply met with the "a newer version exists on the system" and the microsoft store version cannot be located with a search.

Looking like I shall have to dig around to remove all remaining parts of the install at the weekend when I have time as there does not appear to be any install tool to cleanup the remnants,

Went into the "HPSA9x" folder and installed the APPXBUNDLE file and now back up and running.

Not gone into microsoft store as yet so will aim to try and prevent the update form there but that will only last so long no doubt.

Same here on HP Elite X2 G4. On my system, there is no HP Services Support Frameworks to un8nstall. So when I uninstall HPSA, and reboot, reinstall using downloaded version 9.6.714.0, my system stated that newer version is on my system and it just quit.

my version that not working is 9.6.838.0, which updated via Microsoft Store. After updated and reboot. Same problem as you reported occur.

what a mess. HP should be more careful with release. HP also must have solution that will completely remove HPSA and let user start fresh to fix the problem.

I see version 9.6.714.0 not 9.6.838 or other. On my HP Elite X2 G4, there is no HP Sevice Support Frameworks on Apps and Features to remove, just HP Support Assistant. After uninstall, reboot, HPSA refuse to install stating that newer version is on my system

How can I fix this mess.

Strongly agree that HP has to immediately pull this faulty update version 9.6.838.0 out of Microsoft Store immediately. And when a new working version is available, notification must be provided on the Microsoft Store update page so that users know that this mess has been cleared.

for now I have stop auto updating and very careful, when I do manual app updating, to cancel HPSA from updating. This is very annoying

Conveniently, my computer has kept the store apps up to date and the defective version of HPSA has now been installed.  Back to square one!!

I assume HP will push out another store update to correct this so for now I am gong to leave it and see what happens in the next few days.

Still a little puzzled over the bios update that will not work as a separate download from the software and drivers website.  As it is packaged, I can't see a way to use a USB drive to update myself either.

If HP push out a new working version of HPSA, can you please update information here? I have disable Microsoft Store auto update over WiFi, and use manual update. I am careful to cancel update to HPSA to keep working version 9.6.761.0 on my system., so HPSA run.

if new version that survive reboot and work is available through MicrosoftcStore, can you please update here so 5hat I can update HPSA and set Microsoft Store auto updat3 back on

Thank in advance for info update, and so sorry that HAp pushed out faulty update that create problem.