It has been a while since anyone has replied. Simply ask a new question if you would like to start the discussion again.
Arindal
Level 2
13 11 2 0
Message 1 of 15
3,218
Flag Post

I bought the Pavilion 17-ab304nc (2PR98EA) notebook last week and since then I'm experiencing serious fps drops and stuttering in games. After a while of investigating I found out it's caused by processor throttling.

Specs: i5 7300HQ, Nvidia GeForce GTX 1050 ti. Those specs are showing us that the notebook should be capable of some mediocre gaming even with the recent game titles.

In game, when the processor reaches 70 degrees celsium, it throttles for few seconds operating at 800 mhz instead of 3100-3500 that should be capable of (depending on # of cores working). I found out that the BDPROCHOT value should be set on 95 degrees by HP - but this never happens - when on 70 its seriously decreasing the power. Intel XTU shows no throttling, but I see there temperature drops from 70 - 60 every now and then in seconds - this is the sign of underclocking. Also, when using throttlestop programme and forcing of using highest processor multiplier and disabling BDPROCHOT nothing happens. i think that this option is disabled by HP somehow.

GPU is working stable at 65 degrees full clocking of around 1600 mhz.

Second thing is I seriously doubt that the fan is pushing as hard as it could. Working on around 3000 RPM is hearable, but I thing it could do better - this is because when the laptop was updating its BIOS, the FAN was really noisy. No change with HP coolsense on/off.

I've used HP assistant to install all the newest drivers and BIOS.

This is my first HP laptop and I'm dissapointed, because it is very reasonable priced notebook and I thought it would be a great choice.

Any other trick might do? Different laptop BIOS? Different intel thermal management driver? I repeat this laptop is brand new.

Thank you a lot for your inputs and thoughts!

I found out one solution on Nvidia forums.

The problem is visible with both GPU and CPU load. Intel management software is throttling CPU when GPU gets above 70 degrees thus cooling down the whole system.

If you encounter similar problem, you can try this trick: 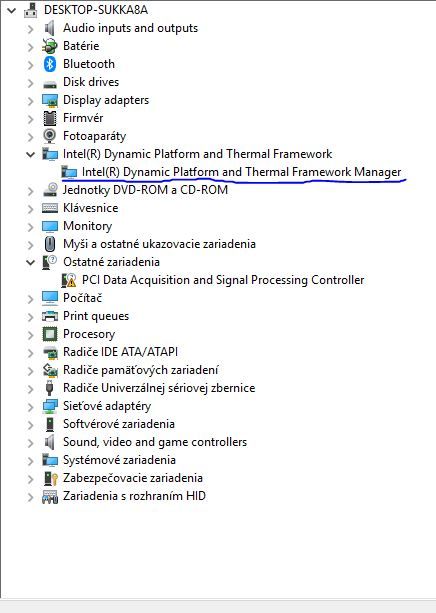 After this, you'll get very good performing system which should be...but on the ohter hand, quite high temperatures around 80-83 degrees - stable.

I read that Windows will re-install those drivers automatically so you have to disable and ban this option with gpedit or by registry editor.

Update: No, not working. Sending for an RMA.

It seems that all the new pavilion have the same problem. I am experiencing the same issue since November! HP support is still investigating the problem.

Here you can find more about my case
https://h30434.www3.hp.com/t5/Notebook-Video-Display-and-Touch/FPS-and-CPU-Drops-Plugged-in/td-p/659...

I forgot to write about another issue I have.

Except from cpu clock drops I have also some lags after updating to windows 1709. I have a video portraying some of these.

Did you notice any changes in your laptop with the 1709 version?

I forbid windows to use update 1709. So I cant tell much on this.

I used few solutions from this and another forums - POWERMIZER Switch program - I was able to play without lags for 1.. i repeat ONE evening and after I started up laptop again It was not working anymore.. I dont know what is the issue and how to fix it because I saw that this notebook can work VERY VERY well , I got 100 FPS in Playerunknown's battlegrounds (1920x1080 resolution, very high textures, high antialiasing, ultra view distance, other settings - very low) which was amazing. But after reboot the problem come again and I have 5 seconds 100fps 5 seconds 10 fps due to processor throttling.

This is my first HP notebook and I am also very disapointed. So much money for worthless piece of hardware. If I wanted office notebook I would buy something smaller and less power consuming...

I was thinking about replacing original 150w charger with original 230w charger but this is another 100 euros I dont want to spend !!! I dont know if it might help.

I know how you feel Arindal. It’s my first HP notebook too. I have tried anything to solve this issue but it seems that ONLY A BIOS UPDATE could solve it permanently.

The only thing that we can do is to make some noise here and in other websites in order to HP take seriously this issue.
It’s a common problem that exists not only in Pavilion notebooks, but also in omen and envy series.

New BIOS 61.A solved this issue.

In particular, while playing games with AC adapter plugged in, the notebook works PERFECT.

But when I tried to play with the AC adapter unplugged, I experienced again some CPU clock speed Drops.

I know that no one play games using the battery but if you like to run heavy programs, such as autocad and photoshop, it may affects the computer's stability.

Arindal, did you try to use the notebook unplugged?