Hello, i own a ProBook 6470b for 5y now,  I upgraded through these years some hardware, and never before had this issue...

so, the laptop is:

So, few days ago, broadcom bluetooth went missing.  Never happened before to me (but it is known issue, my co-worker own 8470p and i didn't manage to get working bluetooth, appears sporadic.)

I try every single solution here and on web, tryed /sfc etcetera command prompt repairs, tried restore point and still no. When install drivers for broadcom win7x64 (there is none for 10) compatibility  assistant pops up and says that there is security or perf. issues... How to force windows to accept the driver and let me be...

So, don't know if anyone reads this topics, but here is what i read and learn. There is known problem with old HP program, called HP connection manager, it only runs under win 7, seems it operates radios on old winOS, late OS 8 and up have integrated manager and if you turned off BT and WIFI through win7, and upgrade to win8 win10 - all radios stays turned off... until you go back to win7, install HP connection manager, turn them ON and etc. This is not my case really,  just post here to know. Main problem seems to be Broadcom, they do not support these devices anymore, and no drivers and firmware updates from them, problem is that legally no one except manufacturers (HP, DELL, etc) can distribute broadcom BT firmware outside of drv pckges.

So i think microsoft somehow deleted my BT firmware, I tried under Linux debian to manually add the firmware, but, for gods sake, i dont know how to get VID and PID for that annoying little thing when my PC says i do not have such adapter.  If anyone encounter this, and fixed it, please share 🙂

edit:thnk that i found what i need for that little fella : 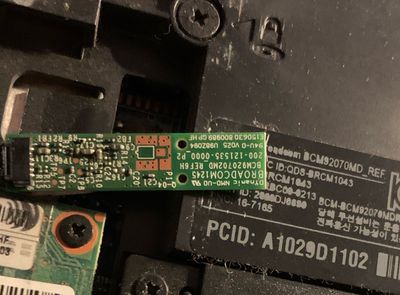 edit2: so BT run under linux, but in Windows still not working.. apparently the firmware is read every time PC starts.. So i will wait for Bill G to release the driver