As of Christmas Eve 2020, my computer will drop the wifi connection. And every time I have to do a full system reset (not just restarting the computer) to fix it. This "fix" will last about a day before it drops again. I thought it might have something to do with sleep mode or turning the computer off, but that mainly seems to be when I'm most likely to discover it offline- it's dropped during active use too. I've tried unchecking the box to make sure it doesn't turn off my driver for power conservation, that doesn't work. I've tried running my troubleshooter- it just tells me there's a problem with the network adaptor that it can't fix. I tried putting in a ticket about two weeks ago and have gotten no reply from tech support, and stayed on the line over the phone for a half hour trying to get through before giving up. The Virtual Assistant doesn't help. I purchased this computer on October 23rd of 2020 and received it early November, so it's only two months old and still well within the warranty. But I'm tearing my hair out here just trying to get anyone to talk to me. I'm considering just taking it to a local shop, but I know they'll just end up ticking a few buttons and charging me 100 bucks for it. It's possible I just haven't found the right old forum post with the solution I need, but it seems most people's issue was with the driver turning off for power conservation, and that didn't help me.

The specs for your PC indicates that it comes with the dreaded Realtek RTL8822CE wifi adapter.

That model wifi card and its close cousin, the RTL8821CE wifi adapter are nothing but trouble.

Here are the links to the latest wifi and bluetooth drivers HP has for that model wifi card.

Maybe they will help.

If not, I suggest you opt for a decent USB dual band wifi adapter, or you can remove the Realtek card and install this Intel AX 200 wifi card.

Thanks for the reply! I've tried the download and set it up so here's hoping all goes well. I'll close this if it lasts a few days but I don't want to call it too early.

Installing the new driver lasted about two days before it stopped again. I was so hopeful and now I'm at a loss. I don't want to have to spend money to get a piece of hardware to fix a problem that shouldn't be happening. I can't get ahold of any form of customer support to get a very basic yet essential piece of a practically new pc running. At this point I'm strongly considering just sending the thing back but it sounds like a long strenuous process that would leave me without a pc in the meantime, and I would not be soon to trust hp again, although they're the only real accessible option for my budget. I got this one because I couldn't afford something nicer and it was apparently wrong of me to assume that at the basic level they'd send me something that functions. I'm going to have a knowledgeable acquaintance of mine come look at it. Thanks again for your help.

Installing your default HP drivers probably only worked for a few days because that's how long it took for Windows to detect you removed theirs and snuck their replacement back in the next update.

I have a Zbook with adapters Intel Dual Band Wireless-AC 7260 &  Intel Ethernet I217-LM and think I've finally found what the problem is.  Lose wifi signal randomly, show disconnected from my router, sometimes take couple minutes to reconnect. This happens every 5-45 min.  Makes doing anything online difficult and online gaming impossible. I've spent 10+ hours on this over the period of several months, fix the problem only for it to return again.

Event Viewer showed the adapters seem to be resetting itself "The network interface "Intel(R) Dual Band Wireless-AC 7260" has begun resetting. There will be a momentary disruption in network connectivity while the hardware resets. Reason: The network driver requested that it be reset. This network interface has reset 8 time(s) since it was last initialized."

Finally figured out the problem happens every time after Windows 10 installs this update:

Then I need to reinstall network drivers from HP's site and fixes the problem......... until Windows installs that update again. I've set updates where it asks me first before downloading and installing but it won't let me exclude this driver/update. There isn't a way to disable it, it's forced on you. I keep a copy of my laptop's HP network drivers on my HDD because the next time I update Windows, this driver will be included again and I will have to reinstall hp drivers again to fix the problem.

I read that Intel has stopped supporting this family of adapters but that's no excuse for HP to not have a solution. Try reinstalling the default drivers and keep an eye out for Windows Updates. I hope this helps and I hope HP comes up with a solution.  I'd like to sell this laptop and upgrade. But how do I sell it in good conscience without mentioning they will need to replace drivers after every Windows update. And then who in their right mind would buy it? This pisses me off something fierce.

You can find it here:

And you have to deactivate "Microsoft Wi-Fi Direct Virtual Adapter", if you have poor Wifi performance or Ping losses.

Aaaaaand... yesterday it happened again. As I mentioned in above post, the driver update showed back up in Windows Updates (took about 5 or 6 days), I reinstalled default HP Zbook 15 G2 drivers and all is well. 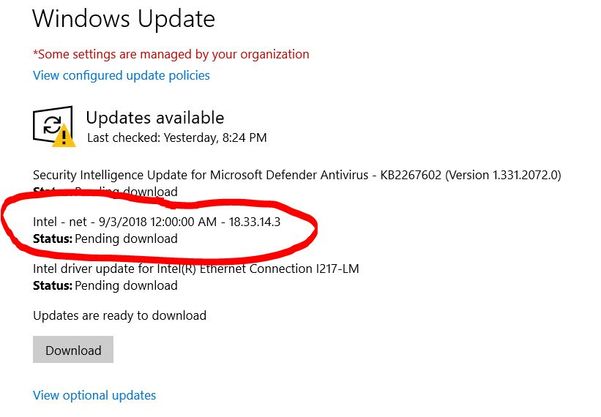 Hello Danial @DanEban. Thanks for the reply. Interesting idea, that fix has not been among the many I've come across trying to solve this. But I am confused, did it work? You said 2 days.  Next time Microsoft includes that intel driver in it's next Windows 10 updates (let's see how many days it takes), I'll can test that out and report back.

since Feb 24th I have no errors any more.

Hope it helps you.