OCR Support for HP OfficeJet Pro 6978 All-In-One: Where Is the Feature?

The option to select an OCRed document output, aka searchable PDF, does not appear to be available in the HP Smart app.  The product box says that it supports OCR.  No other scanning software packages appear to be available for download from the 6978 Software & Driver page.  There are some related forum posts that hit around the issue, but don't solve the problem:

1) This post asks the question: Does OCR support exist for the 6978?, but the solution doesn't answer where the feature is or how to enable it: link.

2) This post states that to get to the OCR feature (on a similar model) that you have to download the "HP Full Feature Software" and gives a link, but the link is broken: link.

So far I have not found a solution.

Download and install the HP Universal Scan Drivers, this will add OCR capabilities to your HP Scan software:

As a reference, please see below support document:

Click the Yes button to reply that the response was helpful or to say thanks.
If my post resolve your problem please mark it as an Accepted Solution 🙂
Reply
Was this reply helpful? Yes No

As suggested, I downloaded and installed the Full Webpack 51.6.5453-SJ0001 package.  While it was installing I did see a message about installing an OCR module.  After that I also updated my version of HP Print and Scan Doctor to version 5.6.6.  After running HP Print and Scan Doctor, it install some recommended updates.  Then I ran it again to make sure it came up clean, and it did.  Now when I run HP Scan (version 2.1.0.5887) from the desktop shortcut, it lists no scanners.  When it then searches for the scanner on the wireless network, it can't find it—even though it sees the correct wireless network.  Then when it prompts for the printer's IP address and I type it in, it still can't find it.  The printer is accessible because I can ping it at that IP address, and I can get to the embedded web server via a browser.  I am not using any add-on firewall software.  I have even tried specifically allowing this app in the Windows Firewall and listing it as an exception in my antivirus software; neither of those actions made any difference.  This particular application appears to not be compatible with the HP OfficeJet Pro 6978.

Have you launched the HP  Officejet Pro 6970 software and selected Scan a Document or Photo following the HP Universal Scan software installation?

The universal scan driver should be installed to add OCR option for your original printer scanning software with an added scan as Editable Text option, it should not locate your printer on its own,

Click the Yes button to reply that the response was helpful or to say thanks.
If my post resolve your problem please mark it as an Accepted Solution 🙂
Reply
Was this reply helpful? Yes No

Yes, that's precisely what I did try.  I launched the HP OfficeJet Pro 6970 app, then selected scan document, then HP Scan launched, but no scan to PDF with OCR option shows up. 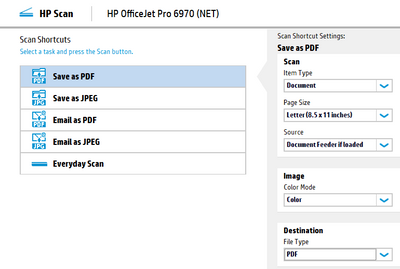 Like I mentioned, it doesn't appear that this particular package, Full_Webpack-51.6.5453-SJ0001_Full_Webpack.exe, is compatible with the OfficeJet Pro 6978.