I new here, just like to check that is elitepad 900 G1 able to  upgrade to windows 10?? so far i don't see any post about it, hope to see more post. Also i don't see any ElitePad driver from HP web site for windows 10.

All drivers/utils from HP are on the latest version and I've got the Windows 10 update icon.

Unfortunately this PC is not suitable for Windows 10).
The detailed reason seems a compatibility problem with the Intel(R) Graphics Media Accelerator.
I see the following description:
"Dieser Bildschirm wurde vom Hersteller nicht auf eine Kompatibilität mit Windows 10 ausgelegt. Wenden Sie sich an den Hersteller, wenn sie Unterstützung benötigen"
(This screen was designed by the manufacturer not on compatibility with Windows 10. If you need assistance, contact the manufacturer).
So in my opinion an update to Win10 without new drivers is not possible. Perhaps HP or Intel will create a new driver for download or another solution 🙂
Thanks for any further assistance!
Was this reply helpful? Yes No

If you have installed the latest BIOS, firmware and drivers, the Windows 10 icon in the taskbar will not report any issues.

I do not advise upgrading at the moment though. At least not on the HP ElitePad 900 G1. I have enountered many issues. Some issues might be explained by the servers of Microsoft being overloaded, but others are clearly bugs and annoyances in Windows 10 itself. Some examples for your reference below.

When you wish to show all icons in the taskbar, you will shortly see the following screen afterwhich the window crashes and disappears. I have had various open windows disappear on me and they are really closed then, not hidden from view for example, the process is terminated. After a few updates where installed via Windows Update, the screen below at least no longer crashed. 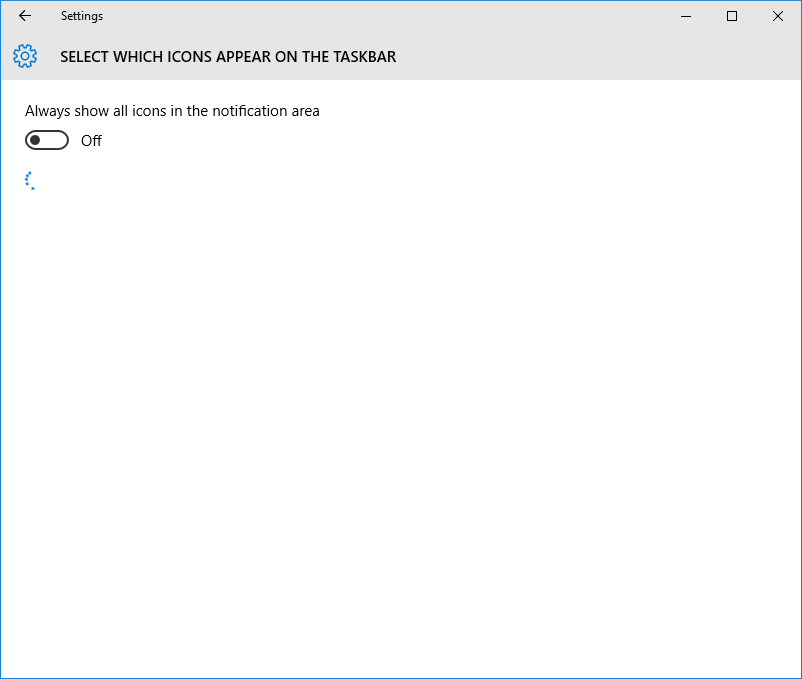 Talking about Windows Update, you might have read that you cannot select which updates to install anymore, which I see as very bad development. Windows Update has had a graphical makeover too. It now looks like a child made it in Microsoft Office Word. 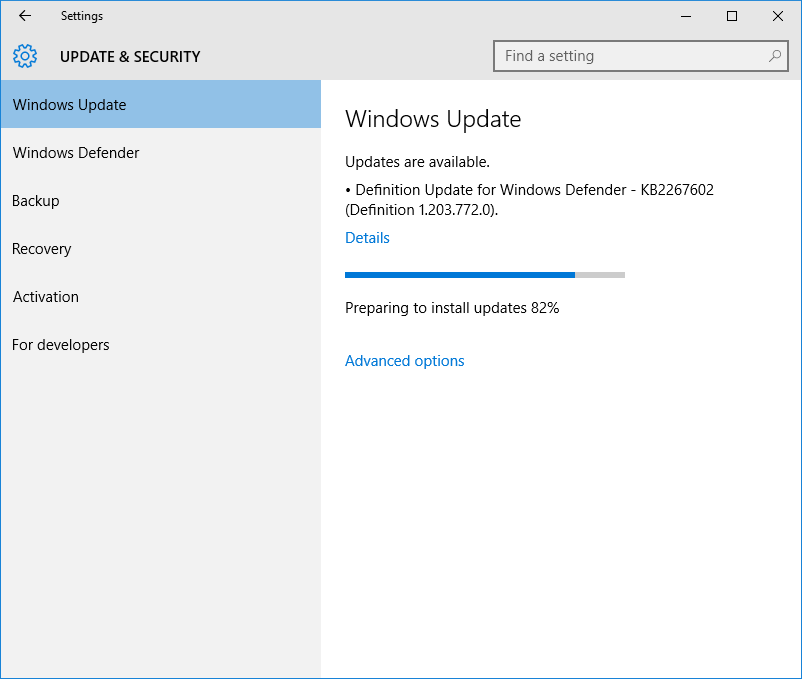 When opening the Windows Store, I noticed most text was missing. I do not know if one of the updates solved this issue or if it had to do with the servers of Microsoft being overloaded, but the text is now back again in most places... 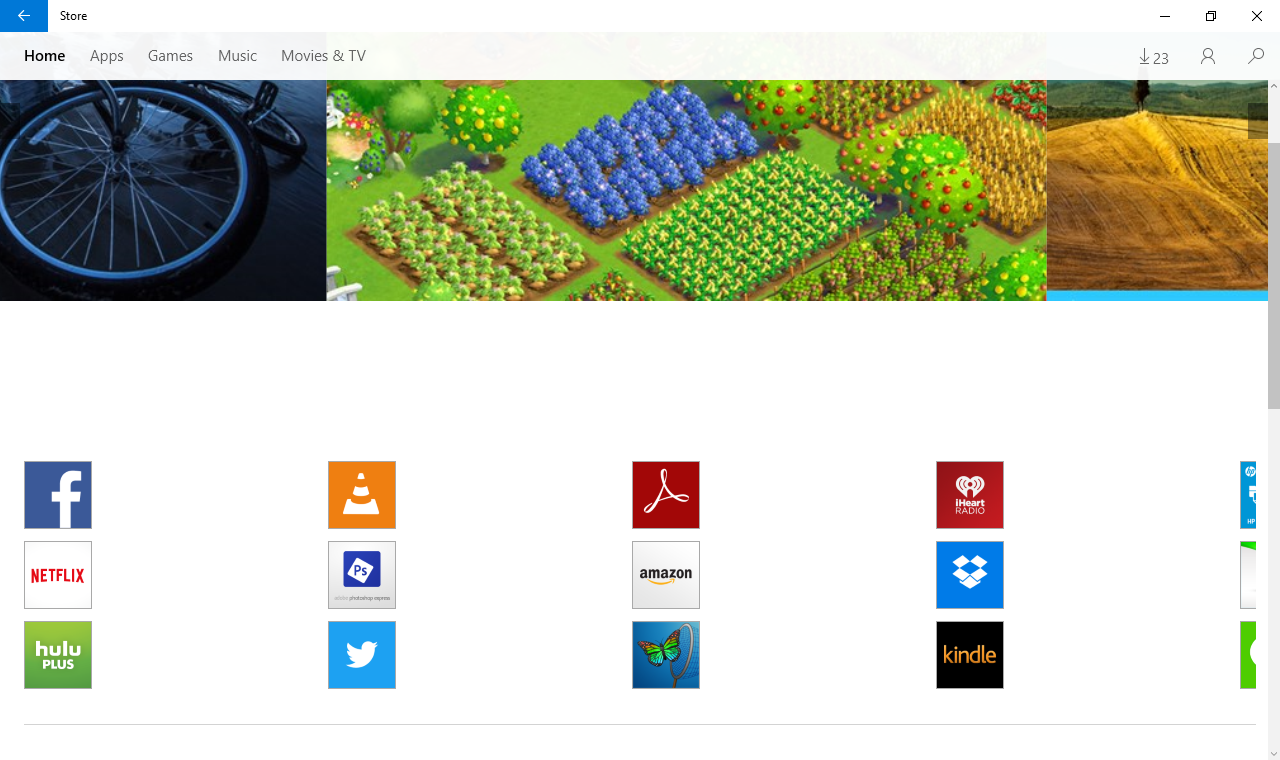 ... although some buttons are still missing their text. If you select the button, you can see the text. 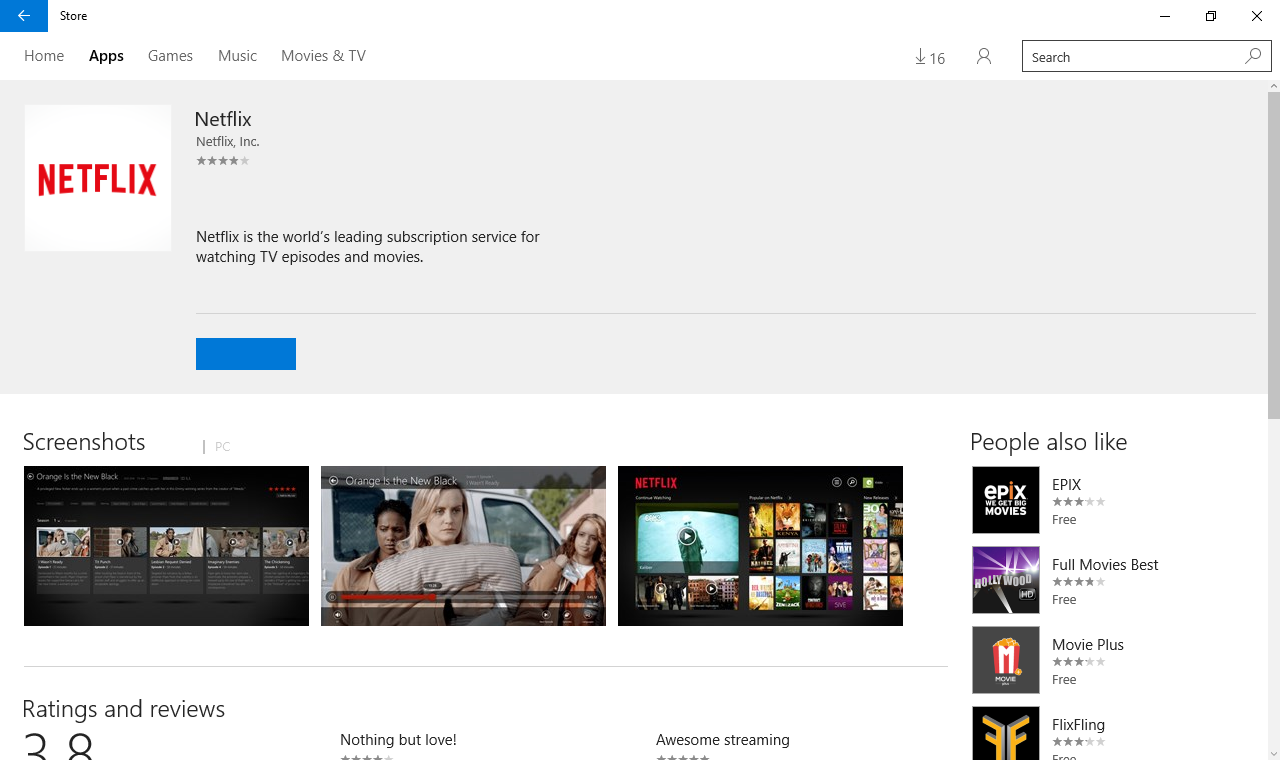 There were at least 23 updates on the default apps out of the box. I did not install any new apps myself. The update window is missing a lot of text, progress bars do not show a percentage, et cetera. The blue button shows the text if you select the button, but elsewhere the text never showed for me. 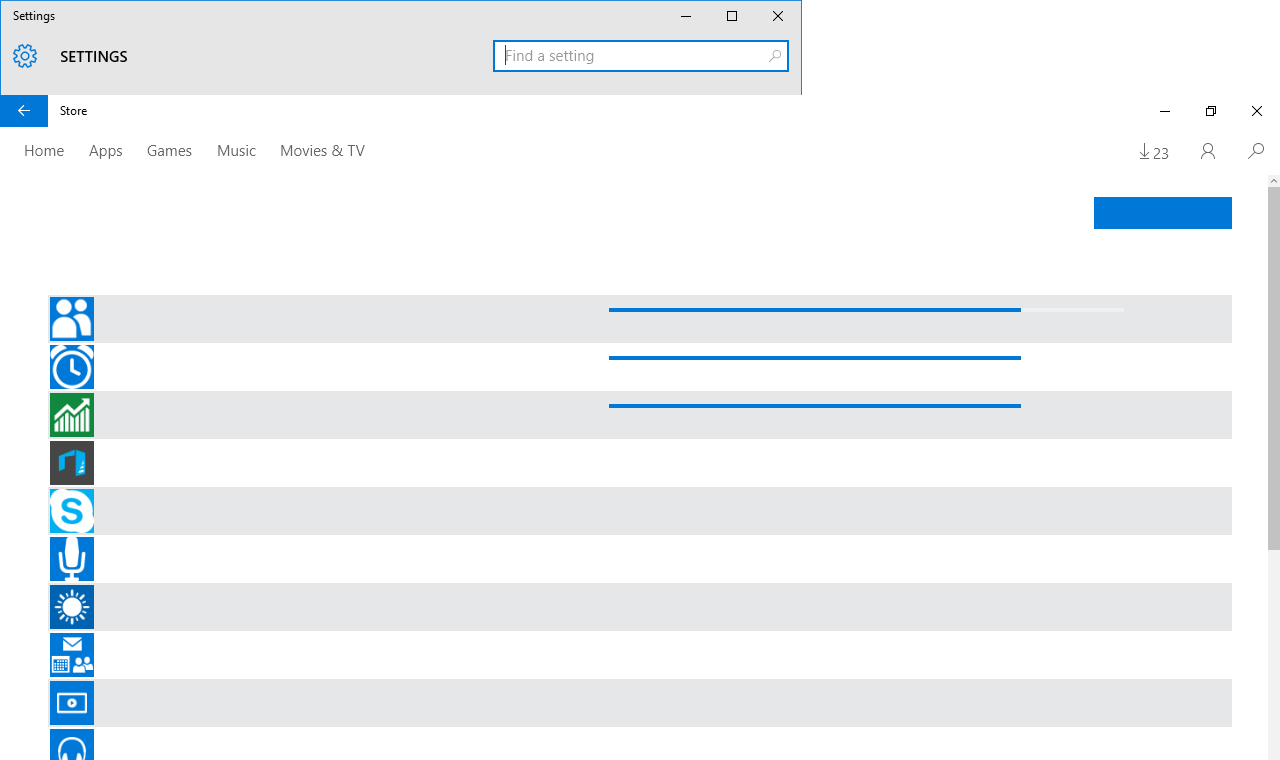 But like I wrote above, some issues might be explained by servers of Microsoft being overloaded perhaps... but that would not explain text not being visible in the search. When I took this screenshot, the grey button did show its text, but at other times it was just plain grey. 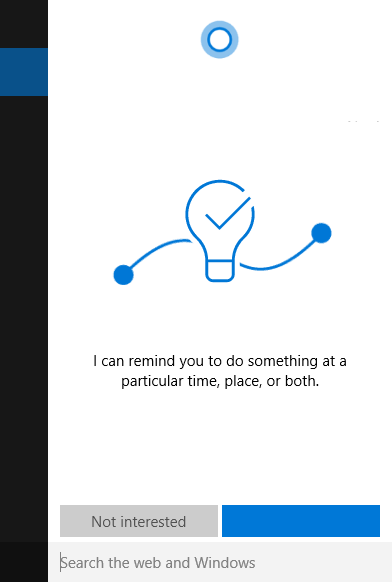 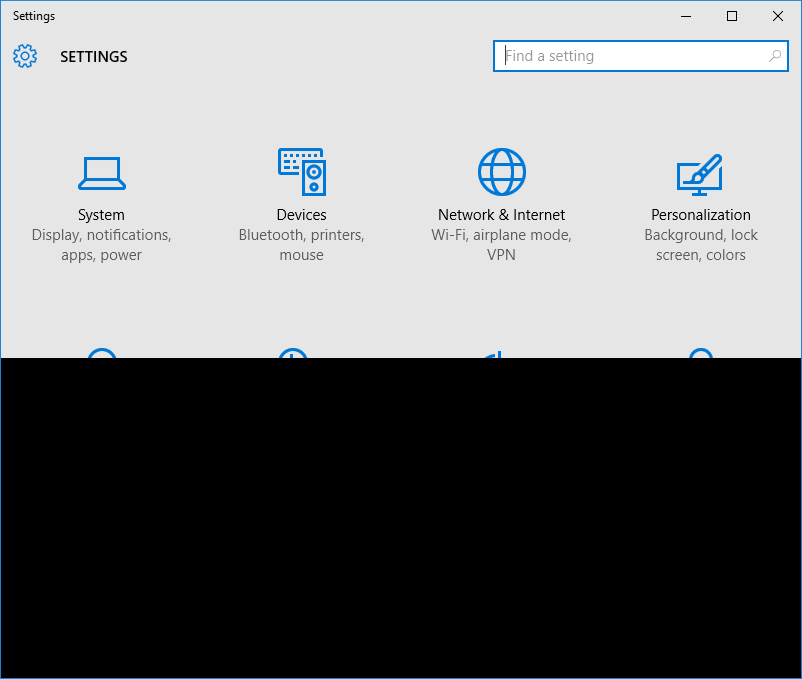 In the power options I disabled all kinds of locking of the device as I do not want to re-enter my password. In the Settings window I came across the following option, which acts independently from the power options. Setting this to Never still locked the device after a while though, so this extra setting does not work properly as it seems. 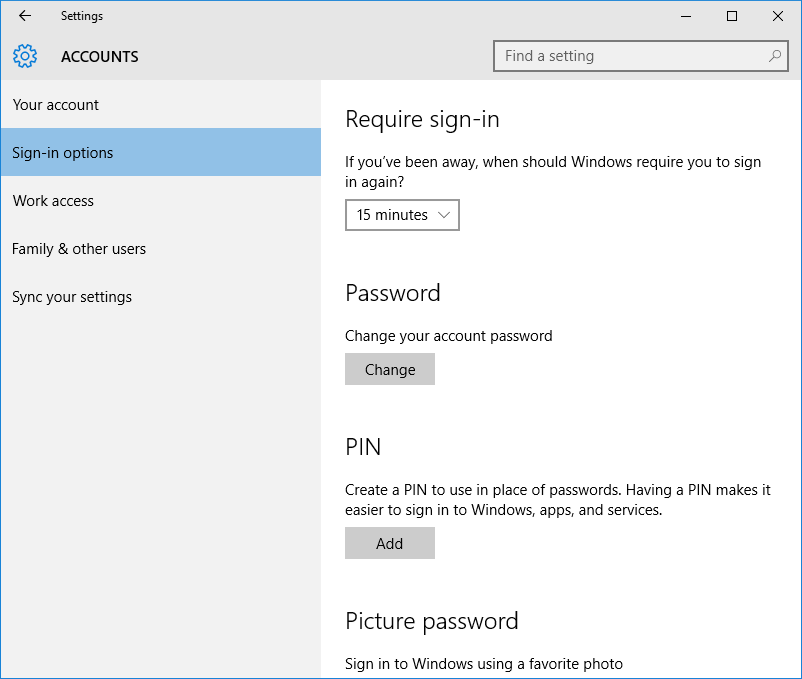 Several pre-installed apps cannot be removed. You can only unpin them from the Start screen. This was also the case with Windows 8 and Windows 8.1, but I would have thought that Microsoft would have listened to the complaints.

There is an app called Phone Companion which crashes when started.

There is no big overview anymore of all your programs. Yes, you can go to the all apps menu, but you will see folders there too and you will not see what is inside until you open them, such as Windows Accessories. On Windows 8 and Windows 8.1 you would see the folder, but you would see which programs it contained straight too. This is now gone.

I could continue with other things I came across, but these were the most noticeable. Before installing Windows 10 on any other device, I will wait some more time. Maybe try it on a virtual machine first, to see how many of these issues occur on other devices as well. For now I cannot advise Windows 10 to any of our clients. The way it feels to me now is like we have a second Windows Me, Windows Vista or Windows 8... Windows 8.1 solved many of the Windows 8 issues, maybe Windows 10.1 will do the same for Windows 10...

I upgraded, and the upgrade using the ISO file for W8.1 32bit to W10 32bit (Upgrade, not create media) went very well. No issues at all. Generally, the system works OK, I guess that some of the problems I experience may also come from not yet fully understanding W10 :). For instance I have not yet fully figured out the changes when running in Tablet mode or not.

Accounts and connections were transferred perfectly OK (the tablet is a member of a domain in the office). So far I only used it at home attached to a local Wifi.

The only issue I currently experienced is a missing driver for QC Atheros Bluetooth. The device is not "powering on" according to the message in the Device Management list. I downloaded the latest AR3002 Bluetooth 4.0+HS driver (still 8.1, W10 drivers are all greyed out) from the Atheros website and will try to install that tonight.

I also realized some graphics issues such as are described in the post above, for instance the missing text in click fields (Cortana settings)

I am sure the situation will improve over time. I would not believe that HP is "giving up" all the customers with an EP900 already............

Thanks all for the replies!

I'll check and do further tests after my vacation 🙂

I am experiencing exactly the same issues like MB95. If someone has an answer to that, a notification would be kind.
What really surprises me, is that HP is not able to provide he necessary drivers prior to a new OS launch for its devices. The Windows 10 launch again could not be that surprising to them, right?

Best regards, BOFH
Was this reply helpful? Yes No

Try 1176 version of video driver.  It's standart version for win10. Mey be, it will help

I upgraded my Elitepad 900 to Windows 10 also. At first I was discouraged because after making me wait from reserving the download, it told me I wasn't able to upgrade because of the graphics driver. I decided to force the upgrade anyway to see for myself. I downloaded the file found on this page https://www.microsoft.com/en-us/software-download/windows10ISO for 32 bit, and chose upgrade.

I have been running Windows 10 for a few days now with no problems whatsoever. I even think it makes Windows 8.1 seem sluggish compared to how the tablet performs overall now. It's a definite improvement! Glad I did it.

Follow the guide here, then you will be able to upgrade your Elitepad 🙂

this is the exact problem i am having too.