turn on suggested results
Auto-suggest helps you quickly narrow down your search results by suggesting possible matches as you type.
Showing results for
Search instead for
Did you mean:
Options
Anon16
Level 3
34 31 1 9
Message 1 of 9
2,667
Flag Post

Can anyone advise what I should expect from the fans on a Spectre x360?  (6 core, 16GB with nVidia GTX1050 though see below)

The fans seem to be running to some degree or other almost constantly... I mean I think there have maybe been a couple of minutes at one point on one day where they did switch off (when I couldn't hear them at all)... but other than that, even with no applications running, and the CPU ~1%, the fans are on continuous (even a deliberate test with all my normal apps closed).

The computer isn't getting hot at all. Most of the base feels like it isn't even switched on, except for a small area towards the hinge which is still under body temperature. In no way could you call it hot. It's cooler than most PCs I've used.

I've installed speedfan and cpuid hwmonitor... neither of these seem to recognise the fans (though probably just because those apps aren't being updated these days). It is only the (mildly irritating) noise of the fans which is making me aware they are on.

They aren't on at max... if I really, really do try to stress the PC, they do eventually ramp up louder, but it really takes pushing the CPU usage up significantly to get them to ramp up.

Neither the PC feels warm, nor do the temperature monitors I've installed suggest that it's particular warm either! So it definitely isn't a problem of the PC overheating.

Here's a screenshot of the CPU usage, core temperatures and selected thermal profile...

For the whole of the 4 minutes that the CPU was around 1% shown in task manager, the fan was on constantly. Not on max, and not loud ... but still on and still whirring away quite irritatingly.

The ambient room temperature is around 20 degC (~68F)

My hearing isn't great, and it could be my imagination, but compared to other PC fans that I've heard (and I use a lot of PCs), these seem a little less 'consistency' in the fan noise... to me, it sounds like there is possibly some continuous / random modulation in the noise - they don't seem to be holding a completely stable note. Like I say, that might be my imagination though.

I note there is another forum post where someone described a very similar problem (fans on, but PC cold), and they ended up returning their PC and got a replacement which they said didn't show the effect.

My concern is that I've upgraded to Windows 10 Pro, and that is now activated and tied to this PC... if I send it back for replacement, I don't believe that Microsoft will allow that upgrade to carry over to another PC so I could lose it!

I'm not yet completely convinced this is a hardware problem because the PC isn't actually over heating, and speedfan and hwmonitor are both able to see the CPU temperatures, and clearly the fans are operating to some extent as well, because I can hear them - that's the whole problem! And they do ramp up (eventually) when the PC is put under significant load, so the PC is able to control them to some degree at least.

I did have a problem with system.exe taking 4% continuously, which further diagnostics showed to be related to dxmms2.sys which is related to the nvidia GTX1050. So I currently have that disabled in device manager which got the CPU down from constant 4% to 1% for the above test, and the above screenshot is showing the situation at 1% with that nvidia card disabled (I'll separately try to figure out how to fix that one - but for now it's off so isn't the cause of this fan issue!)

I would say the PC is otherwise running fine... except maybe not quite... I did have the internal speakers lose connection/not found and require a reboot to get back (occurred just once so far), and more worryingly when watching youtube videos full screen, I'm occasionally seeing annoying stuttering in the video, particularly when the video cuts to a different camera angle... I haven't investigated them in detail... and they may be unrelated. I just mention them in case not.

(BTW - Apart from these issues it is otherwise a really, really nice PC... the performance and screen is fantastic... though I guess for the price that really should be expected!)

I couldn't hear any change in the fans until the point indicated... at which point it had been running at 100% CPU for nearly 2 minutes! (Most other PCs I've used would have had their fans reacting much quicker to such a marked change in CPU usage) 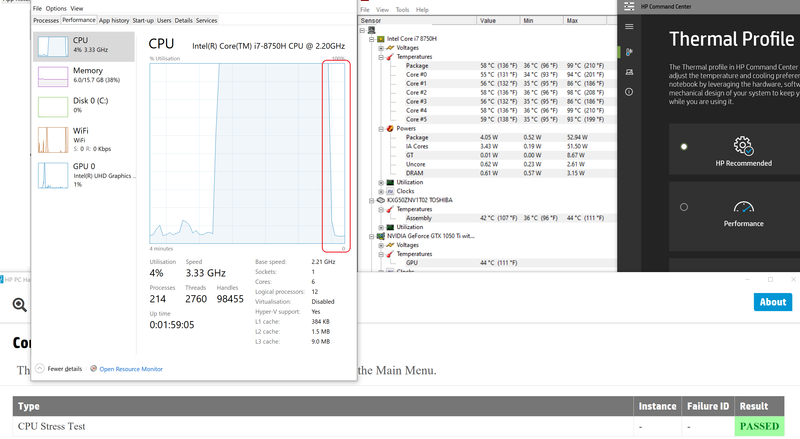 And then while I was grabbing that screenshot, I could hear that the fans then ramped up even further (louder)... i.e. at the point indicated below, the fans ramped up even louder than they did at the end of running the 100% CPU stress test. 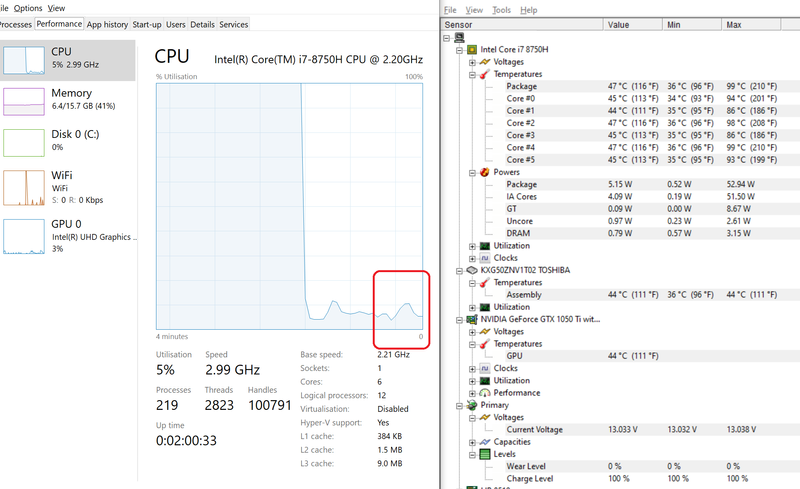 I was having the same issue with my spectre x360 and the latest BIOS update released on 5th of July fixed it for me. It's the version F.31 Rev.A

- Optimizes the system thermal setting to prevent an issue where the fan is spinning constantly when the system in run with a light work load.
- Provides the updated Intel CPU microcode to improve system stability and security.
- Provides support for additional notebook models.
Reply
1 Kudo
Tags (2)
View All (2)
Anon16
Level 3
34 31 1 9
Message 3 of 9
2,618
Flag Post

I thought I'd installed all the pending updates, including BIOS updates (it did at least one BIOS update since I purchased), but after reading your suggestion, I checked again, and for some reason that 5th July update either hadn't appeared before, or I'd missed it, or it didn't install.

So after a couple of unsuccessful attempts trying to install it just now, I finally managed to get it on, and it's made a huge difference.

I'm now on high performance, with the CPU cores between 50-60deg, and the base of the PC is now quite warm but the fans still aren't on. Much more pleasant to use / work on.

And if anyone else is reading this having the same issue, I think I rebooted too soon when trying to install the BIOS update... when you use the HP Support Assistant application it spawns a separate windows installer for the BIOS update, but doesn't seem to track it before telling you to reboot ... so if you don't see the installer appear and click through the steps in it, you could end up re-booting before the BIOS update has been prepped, so the reboot doesn't install anything (at least I _think_ that's why my first couple of attempts were unsuccessful)

BIOS version F.31 did seem to resolve the issue I reported above, as per my original text above... but subsequently I've become aware of a more significant side effect of the update to F.31 that has now resulted in me reverting to BIOS version F.28  .. in summary high performance (with BIOS F.31) is no longer anything of the sort... with F.31 when I want the power, and are happy for the fans to do their job, so set it to "Performance" thermal profile, I found I was unable to get any sort of performance.

See this thread for details ... https://h30434.www3.hp.com/t5/Notebook-Hardware-and-Upgrade-Questions/CPU-slowing-right-down-and-CPU...

My laptop is only a few months old. Checked the BIOS update as per your notes and had same version. Checked HP website and obtained latest version (Aug 2019) and the result is just the same.  Machine has fan going with Outlook and Chrome browser only open.  Completely lightly loaded and yet fan is almost continuous and makes no difference either between my knees or on a flat table surface.  Ambient is <20deg.

Didnt do this at new so what's changed? Only a couple fo scheduled Win 10 updates and the BIOS update I just did. So HP what's up as this makes me think I'll have battery issues down the track as it is getting too hot under just day to day use

I have also noticed the problem is worse when the laptop is plugged into the mains power.  Running off battery the laptop seems to run cooler and fan slower. I have looked at the power settings and gone to the lower power/slower performance end in order to try and minimise fan/heating issue.

That does not seem to assist at all when laptop plugged in though.  Any ideas HP?

.... Checked HP website and obtained latest version (Aug 2019) and the result is just the same.  Machine has fan going with Outlook and Chrome browser only open.  Completely lightly loaded and yet fan is almost continuous and makes no difference either between my knees or on a flat table surface.  Ambient is <20deg.

Odd... can you double check which version you are on?

I found it the other way around - the new versions fix the fan coming on excessively (which was the problem I had from delivery), but I now have the problem that I can't get high performance with the keyboard pushed back to make way for a full sized keyboard for productive work.

The symptoms you describe - fan on when lightly loaded - was what I experienced on F28. I don't have that particular problem on F31 or F32.

On F31/F32 I now have a CPU that drops to 0.79GHz when I actually want to do productive work, which is absolutely terrible performance - well below the base frequency of the processor.

It's barely even 20% of the (peak) maximum speed the processor is supposed to be able to deliver.

And barely 1/3rd of the speed that it should be able to sustain under load, which is also the speed which I based my purchase decision on, when deciding whether the expected performance increase would justify my investment in a new PC to replace my old one.

I have looked at the power settings and gone to the lower power/slower performance end in order to try and minimise fan/heating issue.

Do you mean in the HP command center?

The "Cool"/"Comfort" setting specifically states (somewhere, I forget where) that it will drop performance and increase fan usage in order to keep the unit temperature cool for comfort.

So that intentionally increases fan usage by design.

And when I gave it a quick test, sure enough the fan did come on, and the unit temperature reduced. But since I'm more interested in performance, and would rather the PC is quiet, other than that quick test, I don't use the comfort setting normally.

I am changing the power settings through the Win 10 Settings option. No sure how choosing a lower power setting would ask the fan to do more work to keep the laptop cool. Lower power should equal less heat and less fan required.

Seems to me that the laptop is running hotter thatn it should be only using a browser and outlook.

I have the exact same problem, except I have a newer model with a 4-core 10th gen CPU with a dedicated MX250 graphics card, model number is 15t-df100. There doesn't seem to be any driver fix or update for this model. Which really sucks because the screen and keyboard are both amazing. but it gets annoying when working in a public environment, and sometimes I even have to put the device to sleep because the fans ramps up too much when there's little to none processing happening on both the CPU and GPU. I really hope there will soon be a fix coming out.