I have a HP Elitebook 8570w that was shipped with Windows 7. I have just installed Windows 10 on a seperate partition of my hard drive (so I have both operating systems currently). After the installation and running windows update everything seems to be fine except for a driver compatibility issue for `HP Disk Filter - SATA/RAID'.

I do not know exactly what SATA and RAID so I Googled them and as far as I can interpret the results I understand both concern my hard disk. My understanding is that SATA is an interface connecting my hard drive to my computer (whatever computer means in this context) and RAID is a  technology for making the hard disk more reliable. I understand that this description is very basic and might oversimplify their meaning or I might even get them wrong.

Despite that I don't know exactly what this SATA/RAID technology does, I would  stilllike to install the proper drivers to enable this technology for my hard drive as it seems it could either make the hard disk less likely to fail at some point  or it might have other benefits I'm not aware of (maybe extending its lifetime).

I couldn't find drivers for this on the support.hp.com/drivers page and also the HP support assistant didn't seem to address the issue.  It seems I need another (manual) way to install the appropriate drivers but I don't know where to find them or how to know which ones I need exactly.

How can I install the correct drivers (compatible with Windows 10) for the HP Disk Filter - SATA/RAID technology for my EliteBook 8570w.

I had the same problem in Windows 10. The only solution that worked for me, was to install the Windows 8.1 version on the HP page in compatability mode (setting = Windows 8). Since then the device manager does not show an exclamation mark anymore and reports, that the device functions properly. I did however not find a way to configure the device (start / stop / report on last use etc.). Does someone perhaps know?

i got the same problem with HP Elitebook 8570p running with fresh installation of Windows 10 pro 64 bit version 1703! 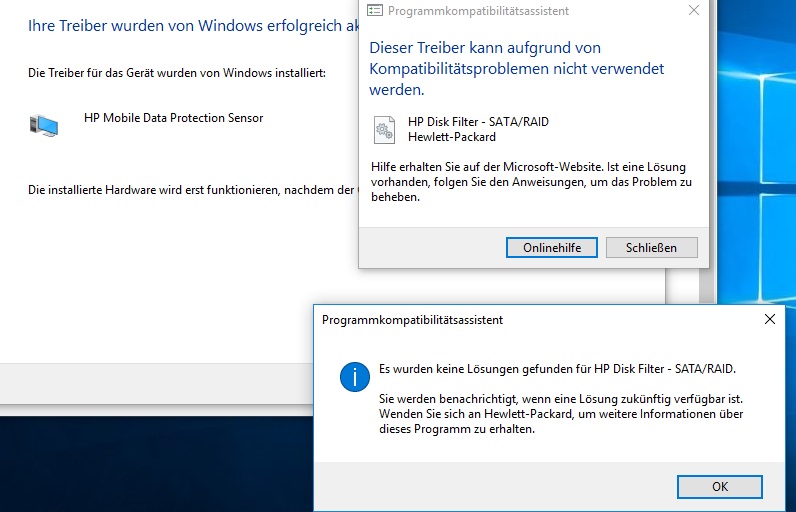 a problem with 3D driveguard and + driver compatibility issue for

i tested different versions of 3D dg but always same error! The W10 driver do not work!!

for how to download the latest version of DriveGuard.

I had the same problem in Windows 10. The only solution that worked for me, was to install the Windows 8.1 version on the HP page in compatability mode (setting = Windows 8). Since then the device manager does not show an exclamation mark anymore and reports, that the device functions properly. I did however not find a way to configure the device (start / stop / report on last use etc.). Does someone perhaps know?

> I did however not find a way to configure the device (start / stop / report on last use etc.). Does someone perhaps know?

Why would you want to stop the service?  It protects your computer from sudden physical "shocks", e.g,. dropping it.

From a command-line prompt, type:   services.msc    and press ENTER.

From this window, you may start/stop any Windows Service.

Within this forum, if you search on the word "accelerometer", you will find TEN "accepted solutions" for problems related to "accelerometer".  Please take a moment to read some of them.

The HP 3D Driveguard Software protects the hard drive by parking the heads if the notebook is accidentally dropped, or is abruptly impacted by another object.

The reason why the accelerometer error returned is because I accidently updated the application using HP Support Assistent which installed a newer version alongside the existing older one. Removing the newer version also prevented the error message from showing up upon boot up. So for me a working solution seems to be to uninstall HP 3D DriveGuard, install an older version of it (e.g. the Windows 8.1 one) and be sure to not update the application.

Unfortunately, today when I booted my computer, the error saying that the accelerometer application can't run on this version of Windows (Windows 10) has prompted again. I am fairly sure that I had rebooted my computer after the install, not receiving any error message but now it has come up nonetheless. I suppose that I could uninstall the driveguard and try and install the version before the Windows 8.1 one and see if it fixes the problem. I do not expect this though.

Assuming that installing HP 3D DriveGuard installs the correct drivers solving the SATA/RAID issue, as suggested on this thread, I have, as 8570w, installed an older version of the software which does not yield the error. I installed the Windows 8.1 version as well.

As I get no errors, I assume the issue is now solved.