It has been a while since anyone has replied. Simply ask a new question if you would like to start the discussion again.
Highlighted
J64-v1
Level 1
5 4 1 0
Message 1 of 5
268
Flag Post

I have a ethernet-connected Officejet Pro 8740 that has been giving me a fit with the scan to computer functionality, specifically with windows 10 (1803 & 1809) in a small office environment.

In it's current state, if I reboot the printer, the scan functionality is restored temporarily (range varies, seemingly from hours to days), but then I have to restart the print spooler service on each machine in order for print jobs to go through.

Even when I can't scan through the normal means, the HPSmart app does allow scanning to function properly, but since it involves not using the panel on the printer, it defeats the purpose of having a central networked scanner.

I have been having this issue for awhile, though I believe it started when I was trying to adjust the configuration through the web-interface, and accidentally locked myself out while trying to test and configure the firewall settings (specifically for ensuring that scanning was working, and not getting blocked). I didn't block the web-interface, but I had forgotten the admin password I had set up.

Since I was somewhat stuck, I had found out about the HP service menu, and decided I would use a semi-full reset to at least undo the changes I had made, and was hoping that it would clear the admin password, but it unfortunately didn't. What made it worse was that the scanning was not working either, even through USB. Scanning to a memory device did work (and we used that as a temporary workaround for a few essential scans), but that would not be very effective for long term use.

After remembering my password (and writing it down) and using a known-good Officejet Pro 8740 at home (one that has 0 issues with scanning), I reworked the configuration to match it, as well as enabling/disabling functions in case settings were activated/deactivated but not showing in the GUI, performed a firmware update for the printer, utilized the print & scan doctor on each machine, and even replaced the router we were using to rule out a networking issue. All that did allow the scan function to work, but in the manner I have described above.

I would prefer to do a full reset with the printer, but the service menu only shows the highest reset available being the semi-full reset. I accessed the menu by pressing the back arrow on the home screen 4 times.

If someone knows how to perform a full-reset, I would like to know how to perform it to rule out any other possible unseen issues remaining from my own mistakes, before starting to try and check over any and all endpoint issues on all the machines (as in full wipe and work up), and then going to do a hardware diagnosis on the printer itself.

I can, and probably will, try another semi-reset and reconfig just to be 100% sure I didn't goof up somewhere, but I would prefer to know that ALL the old settings are all cleared from the printer.

We had used an Officejet 8600 Plus before the 8740, and didn't have any issues with it's scanning functionality, but it had been worn out, had it's feeder tray for the scanner fail, and had it's print-head eventually fail, so we sprung for the 8740 since it meant less downtime for us, since we've trusted and used the HP brand for a long time, and since I had a good experience with the 8740 at home.

If I can't find a way to get something as essential as the scanning function to work (or to get important settings reset), I might not be too keen to nab a high end HP Printer again.

Thank you for the update on the troubleshooting steps already performed.

There are only 2 options to reset the printer.

Enabling Scan to Computer option in HP Printer assistant may resolve this issue. Let us try these steps: 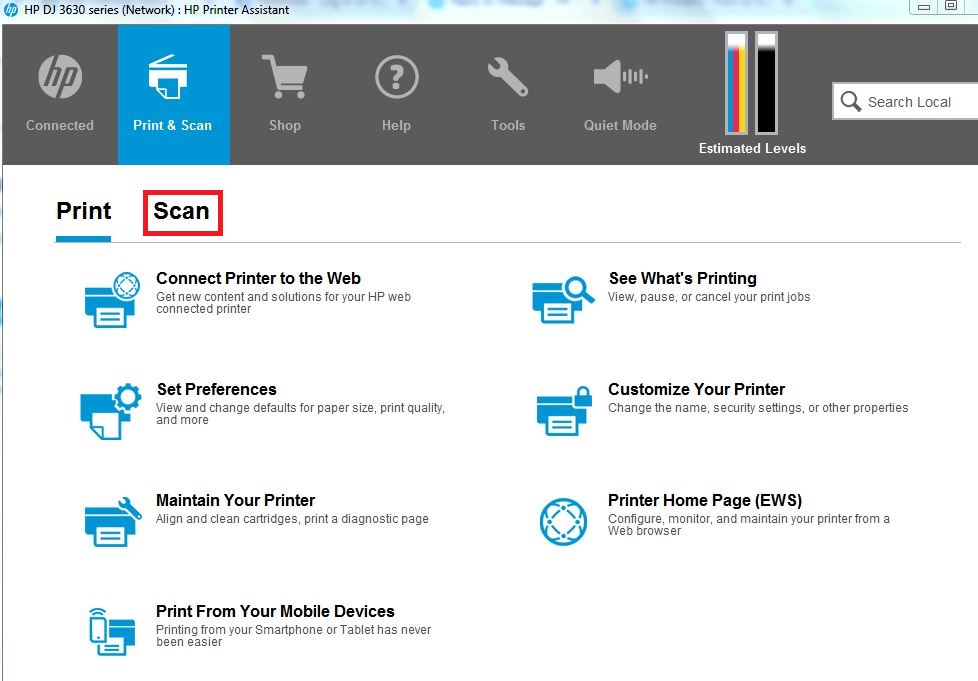 Click on Enable > Check the box at the bottom > Close 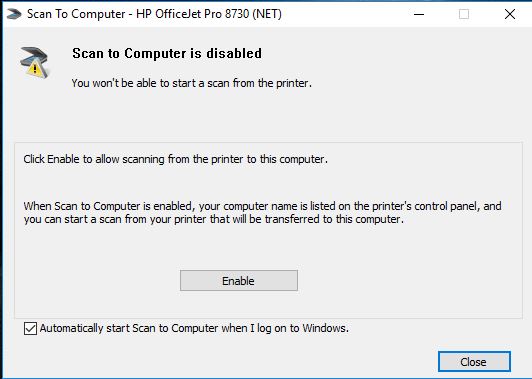 Once downloaded, make sure to run the file to start the installation and follow on-screen instructions.

Let me know how this goes.

If you feel my post solved your issue, please click “Accept as Solution”, it will help others find the solution. Click the “Kudos/Thumbs Up" on the bottom right to say “Thanks” for helping!

That's unfortunate that this printer doesn't support a full reset, especially if you happened to get a used one that had the EWS locked out. Certainly something I'll have to keep in mind with future printer purchases, not just HP's offerings.

After taking the time to perform another semi-full reset, and using the known-good config I had from my other HP Officejet Pro 8740, I got the scan to computer function to work properly and consistently once again (after about a week period of running anyways)

No adjustments were necessary for any of the other machines, so the problem was with the printer itself.

I think I'll avoid trying to configure the firewall on the printer itself for now and just limit it via our network firewall instead.

In-case the issue was related to the firmware or something unusual, the firmware the printer is currently running and had the semi-full reset performed with was WEBPDLPP1N001.1919A.00. The build date on the firmware is 2019-05-10.

Glad to know that the issue is now resolved. Feel free to reach us with any concerns with HP products.

I'm afraid either you're incorrect, or the semi-full reset is bugged, as it did not clear out the EWS locks or the existing password for the admin account.

I even included that fact in my original problem statement

I have been having this issue for awhile, though I believe it started when I was trying to adjust the configuration through the web-interface, and accidentally locked myself out while trying to test and configure the firewall settings (specifically for ensuring that scanning was working, and not getting blocked). I didn't block the web-interface, but I had forgotten the admin password I had set up.

Since I was somewhat stuck, I had found out about the HP service menu, and decided I would use a semi-full reset to at least undo the changes I had made, and was hoping that it would clear the admin password, but it unfortunately didn't.

I still have the old password I originally set on there in tact, as well as the locks on using the EWS. 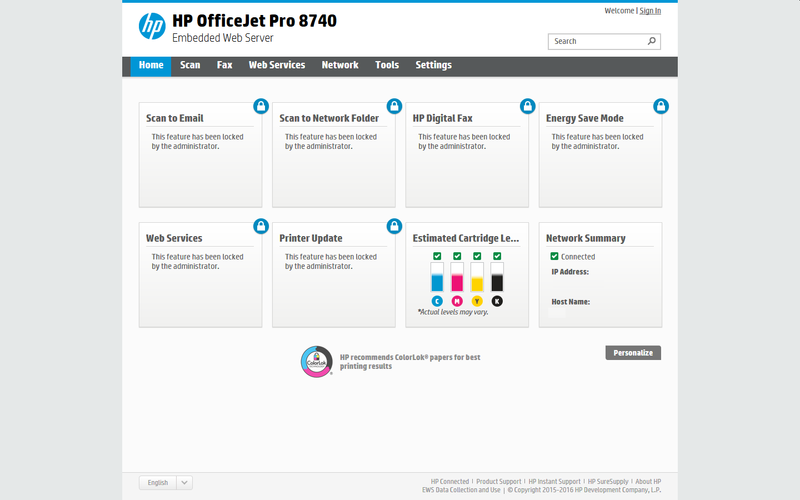 I have seen several other posts that have complained about the same issue, and that's why I originally assumed that a full-reset is required to clear the admin password on the EWS.

If it is supposed to clear it, it's a bug then, and should have a proper bug report filed, considering having your printer turned into a semi-brick for simply forgetting the password,  or having a malicious individual hop on your network and lock your printer when you just wanted it unlocked.

If it isn't, then either there is a full-reset that hasn't been discussed yet, or this is a poorly thought out "feature" to keep dumb people from breaking into the printer.

I know this isn't exactly the problem I had, but I hope that someone provides an answer to this problem, since there are several people trying to deal with it.